Add description, images, menus and links to your mega menu

A column with no settings can be used as a spacer

Link to your collections, sales and even external links

Add up to five columns

The batteries for Gel Blasters

﻿In this article, we will focus on a very important element of your Gel Blaster, THE BATTERY. Indeed, the battery is one of the most important elements, whether it is the type of battery, or the voltage, you will get a completely different behavior of your Blaster, hence the interest to focus on it.

Unlike Airsoft and Paintball, which also run on gas, Gel Blasters run essentially on electric power. This inevitably leads to the use of batteries.

We will characterize a battery according to a few criteria:

What are the main characteristics of a battery?

We are going to compare batteries using different criteria:

According to the type of pure battery (the composition of the battery): 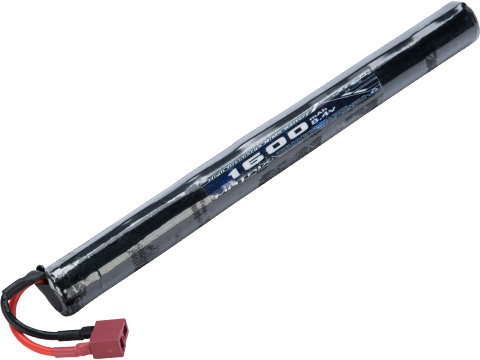 The most common are the Sticks, this type of battery is composed of Nickel-Cadium (NiCd), the particularity of these batteries is that it tend to discharge themselves at rest, and they are subject to a strong "memory effect". This means that a battery that is regularly recharged when it is not empty will retain this "threshold" as its minimum charge capacity.

Then there are NiMH (Nickel Metal Hydride), unlike NiCd, they do not contain heavy metals and are therefore more environmentally friendly. They also have a longer lifespan and can withstand higher charge cycles (more than 300 recharges without any problem). In addition, they have the advantage of being resistant and easy to handle. Not very common in the Gel Blaster community, they are often supplied as standard with entry-level Airsoft products.

The LiPo Gel Blaster battery, which is becoming more and more widespread, has many advantages, and has a much longer life than the other types presented so far. They have constant voltage until the battery is completely discharged. They are also much more efficient with the use of "high torque" or "high speed" motors. Finally, they have an additional technical characteristic, the "10c/20c/30c" values, which is their discharge rate, it is very high which means that they will drain much more slowly than other types of batteries. However, they do have one disadvantage, which is their fragility. It is necessary to avoid complete discharge, which can cause one of the cells to swell and eventually lead to an explosion. The same goes for charging, they do not tolerate overcharging and require the use of a charger with a balance to stop charging when the battery is full. LiFe batteries are less widespread but offer many advantages, they offer all the advantages of LiPo while being more robust.

Just like every energy source, you need to be especially meticulous with your batteries, although some are more robust than others, each can represent a risk in case of negligence.

It is necessary to regularly make a visual inspection of your cells to verify that they have not inflated, for example, a sign of a dead and dangerous battery, which should not be used anymore!
Always store them out of your Blasters, unplugged and in a dry place that is neither too hot nor too cold. There are even special storage bags to store your LiPo batteries safely.
Wait about ten minutes after charging before use to let the cells drop in temperature, we will think of doing the same in the other direction, after a part before charging them.
Use a "balancer" charger or balancer for LiPo batteries in order to be sure of the end of the charge cycle and not to risk overcharging your batteries, which could damage them.

Sign up to get the latest on sales, new releases and more …